Reinstate the Draft!: America's youth must serve their country, one way or another - Sieg Heil! 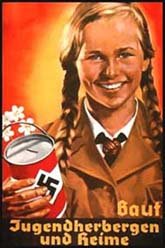 i
Note: This article was first published on September 09, 2006 here at www.moreliberty.org as a response to Edward Bernard Glick's article calling for a draft for domestic 'civilian" service, as well as for military duty. Keep your eye on this totalitarian idea of "national service" - it is not going away anytime soon.

This is where the Far Right truly raps around to meet the Far Left in total agreement that you and your children are merely resources to be exploited by the State. Several prominent Democrats have called for a draft as a tool of "equality" (apparently, equal slavery is fine, so long as it is truly equal, and color-blind) and of course, most right wingers reflexively support a draft as being the epitome of patriotism.
Stewart Rhodes


Reinstate the draft! So says Edward Bernard Glick in his commentary published by the Christian Science Monitor on September 5th:
A draft would do more than just harness the energy and idealism of the nation's youth to meet the military's unmet personnel needs. It would also tap more of the resources of the nation's women, heeding their demands for more gender equality by making their obligations more consonant with their rights....

• All able-bodied and able-minded 18-year-old men and women should have their names placed in a lottery. Depending on how many soldiers are needed - typically just a few thousand each year - a modest percentage would be drafted.
• Then, the names of all those who didn't get drafted should be placed into a lottery for nonmilitary service in city or suburban slums, rural areas, native Americans reservations, or other poverty-stricken places.
Mr. Glick, where are we? Ancient Sparta? The USSR? Nazi Germany or the ant hills of Maoist China? What is happening to this nation? Where has the land of the free gone?

Where in our Constitution was Congress, or any part of the national government, given the power to use our children as literal national resources, for military or domestic "service?" The answer is no where.

The closest thing to a draft power in the Constitution is the power “To provide for calling forth the militia to execute the laws of the union, suppress insurrections and repel invasions” but even that is not a power to forcefully induct people into a standing army. The militia were state military forces, made up of the people of each state, under officers of their own choosing, and they would fight as such, and here at home, not abroad, for the limited purpose of enforcing the laws of the union (which were very few) suppressing rebellions and repelling invasions.

The Founders had a well-justified fear of standing armies, and the thought of such involuntary servitude into a national army never crossed their minds. No, not even the US Supreme Court has had the audacity to claim that the militia clause granted such power. The high priests on the Court knew that such would be an incredible claim, easily refuted. Instead, the Court has relied on the nebulous power of Congress to raise and support an army (while sidestepping the Thirteenth Amendment’s overt prohibition of involuntary servitude).

And of course the powers conferred by these provisions like all other powers given carry with them as provided by the Constitution the authority 'to make all laws which shall be necessary and proper for carrying into execution the foregoing powers.' Article 1, 8."
Ah, Alexander Hamiliton’s favorite catch all statist loophole strikes again!

The Court then dismissed any objection to this “reasoning” thusly:
As the mind cannot conceive an army without the men to compose it, on the face of the Constitution the objection that it does not give power to provide for such men would seem to be too frivolous for further notice.
As for the Thirteenth Amendment’s prohibitions on slavery and involuntary servitude, the Court said:
Finally, as we are unable to conceive upon what theory the exaction by government from the citizen of the performance of his supreme and noble duty of contributing to the defense of the rights and honor of the nation as the result of a war declared by the great representative body of the people can be said to be the imposition of involuntary servitude in violation of the prohibitions of the Thirteenth Amendment, we are constrained to the conclusion that the contention to that effect is refuted by its mere statement.
But the power to raise and support armies was originally only the power to spend money to raise and support an army, to pay people to serve in a standing army if they so chose, just as in the American Revolution, and the people could choose to not serve, walking away, just like in the American Revolution. Why was it that Thomas Paine had to write "These are the times that try men's souls" in "The Crisis"?

Because he had to convince the men in the Continental Army to renew their enlistment contracts. He, and General Washington, who had the first installment of The Crisis read aloud to the troops, had to persuade them, with appeals to their love of liberty, and of country, to stay of their own volition to fight. To their credit, and earning our everlasting gratitude, the vast majority of them were so moved by Paine's words that they stayed and fought, and many of them bled and died for liberty. But what have we done with the liberty they sacrificed so much to win for us?

One of the causes of our rebellion against the Crown had been impressment of Americans into the Royal Navy. And that same practice was later one of the grievances that led to the war of 1812. If Washington had been of such low character, such ignorance of what he was fighting for (he was not) and had even dared to attempt such impressment, such enslavement of the American people into national service during their revolution for liberty, he would have been tarred and feathered and run out on a rail, just like all of the other usurpers of the day.

But now the principles of liberty that sparked and sustained the American Revolution have been turned on their heads in truly Orwellian fashion. Now patriotism is defined not as the willingness to voluntarily fight and die for liberty, but its exact opposite: the support of institutionalized slavery of forced impressment into standing armies to fight abroad whether you agree with the justness of the cause or not, and now, according to this man, also collective forced labor schemes at home.

Just how is it that domestic national service can even be argued to be under the claimed power to draft an army under the Article 1 power to raise an army? This is what happens with all such unfounded claims of power – they expand to encompass more and more until the government is totally free to act in any and all ways upon us it wishes to and we are totally subject to that unlimited power. No doubt the well connected will be able to ensure that the better looking eighteen year old domestic “servants” have to “serve” directly under them, just as Chairman Mao had a steady stream of young girls “serving” China directly under him whenever he needed a break from running the forced labor farms that killed millions.

In the face of such claims that our government may do with us as it pleases in the national intest, as if we were cattle, we would do well to recall just what it was that Thomas Paine said in "The Crisis":
THESE are the times that try men's souls. The summer soldier and the sunshine patriot will, in this crisis, shrink from the service of their country; but he that stands by it now, deserves the love and thanks of man and woman. Tyranny, like hell, is not easily conquered; yet we have this consolation with us, that the harder the conflict, the more glorious the triumph. What we obtain too cheap, we esteem too lightly: it is dearness only that gives every thing its value. Heaven knows how to put a proper price upon its goods; and it would be strange indeed if so celestial an article as FREEDOM should not be highly rated. Britain, with an army to enforce her tyranny, has declared that she has a right (not only to TAX) but "to BIND us in ALL CASES WHATSOEVER" and if being bound in that manner, is not slavery, then is there not such a thing as slavery upon earth. Even the expression is impious; for so unlimited a power can belong only to God (emphasis in original).
We now have over us a government, with its little minions and cheerleaders of both major parties, that, much like Britain at the time of the Revolution, thinks it can BIND us in ALL CASES WHATSOEVER (and for ALL PURPOSES WHATSOEVER). I agree with Paine that if being bound in this manner is not slavery, then there is not such a thing as slavery upon earth, and such unlimited power can belong only to God. And our government is not God.

Nor is it our master. We are not, yet, slaves. And if we are to remain free, we need to resolve ourselves to be as resolute as our forefathers in resisting this new creeping tyranny, which like hell, is not easily conquered. We have an advantage over the peasants of Russia, China, and Cambodia. While they had no example of liberty to follow, we do. Let us do as the Founding generation did when their own government claimed unlimited power over their lives, liberty, and property.

If I can penetrate this prolix prose, I think I agree with what Edward Glick has to say. But he would do well to have it translated into English.

Ah, I think you may be confusing the short quote from Mr. Glick's piece with my rebuttal (which is likely what you find prolix).

Go here, and read his article, and then see if you still agree with him:

If after reading that, and revisiting my response, you still agree with him, all I have to say is - of course you do! Such is the sad state of this nation. Never have such a free people so wanted slavery.