Informant Says He Was Asked To Lie 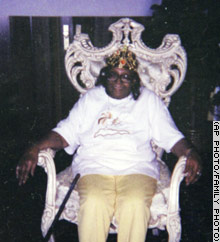 ATLANTA -- There is major fallout from the Atlanta Police shootout that left an elderly woman dead – officers are put on leave and the state and the feds are investigating.Atlanta’s Police Chief announced both the FBI and GBI are investigating the shootout. Also, a narcotics team involved is now on paid leave and autopsy results reveal 88-year-old Kathryn Johnston was shot six times. More here
Posted by Stewart Rhodes at 10:52 PM