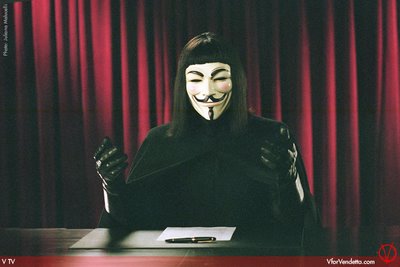 Military Commissions Act, assault on the Bill of Rights by a vile lot;

I see no reason why the Neocon Treason

Should ever be forgot.

To give us a King and a Parliament.

By stroke of a pen or by rubber stamp, his Leader will throw you into a camp.

Complicit judges and Congress in tow

Our Constitution to overthrow.

He goes to bed,

With visions of crushing children’s testicles in his head.

Enemy combatants all around,

Grab them, bag them, board them till they drown.

We're all enemy combatants if his Leader says so;

We the People are We the Enemy don’t you know!

But this is land of the free, home of the brave

Not land of the scared, home of the slaves;

Weimar Germany, Russia, or China this is not

We won’t forsake the Republic our forefathers wrought.

We remember their flag to April's breeze unfurled;

Where once the embattled farmers stood;and fired the

shot heard round the world.

The same defiance burns in us till our last breath

Their battle cry still echoesGive us Liberty or Give us

Cheney, Rumsfeld, and the shrubbery too.

A session of water boarding to rinse it down,

A lit cigarette to burn them.

Put their nuts in a vice,

Confess! Confess! Tell us their crimes,

But before we find out the reason,

We will give them what they deny us

A jury trial for their high Treason.

About the John Yoo Poem.

This poem is loosely based on the Guy Fawkes poem. But whereas the original poem was about a man who plotted to blow up Parliament, this poem it is about a man, and his neocon co-conspirators, who are plotting to destroy our Constitutional Republic. This is my second version of such a poem. You can read the first version here. This second one is closer in style to the original.

Because of the popularity of the movie V for Vendetta, with its obvious and inescapable allusions to the current Bush Administration, the first line of the Guy Fawkes poem – “Remember, Remember, the Fifth of November” - is now being associated with a pro-freedom, anti-authoritarian view here in the U.S. However, the original poem is pro-government and pro-monarchy as it celebrates the capture and hanging of Guy Fawkes, who had plotted to blow up Parliament and the King of England with it. There are some who have considered Guy Fawkes a hero - “"the only man to ever enter parliament with honourable intentions” – but he is traditionally portrayed as a villain.

Still, I see no reason why us freedom minded people in America, who are now dealing with a silly but dangerous man who would be King, and his cabal of neocon King-Makers, should not follow the example of V for Vendetta and transform the Guy Fawkes poem into a poem for our age, into a pro-freedom poem that places John Yoo in his rightful place as the villain at the center of this insidious plot to destroy our Republic.

Because John Yoo is the high priest of the neo-con legal sophists, that band of insidious lawyer-siths who are really government supremacists but who have artfully cloaked themselves as “conservatives” and “originalists” in order to re-write our Constitution. John Yoo was, and still is, the principle legal architect of the neocon assertion that the president's powers as Commander-In-Chief somehow trump the rest of the Constitution and the Bill of Rights - essentially arguing that the president is an omnipotent King, or Emperor, who has a divine right to spy on us without warrant; have us "disappeared" in the middle of the night and whisked off to a secret prison to be tortured; deprive us of our ancient right to jury trial, and instead try us before his own version of the Star Chamber; and have us executed without appeal or simply shot on sight as “enemy combatants.” John Yoo even thinks the president has the power to order that a child’s testicles be crushed in order to force the child’s parent to talk. The recent Military Commissions Act is simply a partial codification of this view – just the latest step in this creeping treason that has as its ultimate goal the permanent triumph of the Leader Principle over the Founding vision of inalienable rights and limited and divided government that must respect those rights. Certainly, Chaney is the political Dark Lord of the neocon Siths, but it is Yoo, as Cheney’s faithful young apprentice, who has caused potentially irreparable damage that will outlast the Bush Administration by making it all “legal.”

Finally, John Yoo and I are both alumni of Yale Law School, and I believe he brings disgrace, dishonor, and embarrassment on the school (as if Bill, Hillary, and Alan “torture warrant” Dershowitz had not done enough in that regard).

And so, I give you John Yoo and the Neocon Treason and Plot. - Stewart.

About the author: E. Stewart Rhodes is an ex-U.S. Army paratrooper, disabled veteran, former firearms instructor, and former member of the D.C. staff of Congressman Ron Paul. Stewart graduated from Yale Law School in 2004, where his paper on enemy combatant status won the William E. Miller Prize for best paper on the Bill of Rights, and is currently a research scholar for Yale writing a book on how the applications of the laws of war to the American people in the “war on terror” pose a grave threat to our constitutional republic. Stewart practices law in Montana. He welcomes comments by e-mail.

A modern version of the Guy Fawkes rhyme, Remember, remember the 5th of November, from the movie V for Vendetta. This version is adapted to the current state of fascism in America in the war on terrorism, with the neocon treason and plot of men such as John Yoo, Jay Bybe, Alberto Gonzalez, Viet Dihn, Cheney, Wolfowitz, Rumsfeld and Bush, and all of their lackis in Congress. I see no reason why the neocon treason should ever be forgot. Freedom Forever!

Posted by Stewart Rhodes at 3:37 PM

Thank you for sharing this with The Price of Liberty!

Thank you, MamaLiberty! It was a pleasure and an honor.

Red Hat Certified Engineer is a professional who has expertise in handling the Red Hat Enterprise Linux System. The Certified Engineer takes care of various tasks such as setting kernel runtime parameters, handling various types of system logging and providing certain kinds of network operability. The professionals must have the ability to install networking services and security on servers running Red Hat Enterprise Linux.