Turn Iraq Over to the Arab League 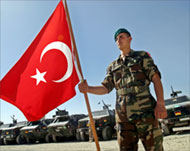 A Rational Alternative to the Nutty-Neocon Stark Choice of an American Total Victory or Total Defeat.

Way back in President Bush’s December 18, 2005 address on the Iraq War, he declared that “now there are only two options before our country -- victory or defeat.” By "victory," Bush meant our troops staying until the Iraqi military and police are strong enough to defeat the insurgency/resistance, however long that takes, and by "defeat," Bush meant withdrawing before that point. The President declared that such withdrawal “would hand Iraq over to enemies who have pledged to attack us ….To retreat before victory would be an act of recklessness and dishonor, and I will not allow it.”

Such a black and white, all or nothing decree from The Decider is what we have come to expect. True to neocon form, there was no room whatsoever for the involvement of anyone else in that decision, other than the President and his unitary executive cabal. Also true to neocon form, in that stark choice there was no room on the ground in Iraq for anyone else other than the U.S. (and it’s Western allies) and the fledgling Iraqi puppet “government.” The message to the Arab world was “Stand back, swarthy brown people, we Anglo-Saxons will sort this out for you!” This is precisely the plan the U.S. had for winning in Vietnam (and we all know how well that turned out).

Bush has stubbornly stuck to this all-or-nothing plan ever since. But now many of the neocon rats have jumped from the sinking U.S.S. Bush, or, in the case of Rumsfeld, have been forced to walk the plank, and the G.O.P. has been sent a pretty clear message from the voters – in the form of a boot out the door for many of them – that the voters are not at all amused.

And so, there has been a “softening” of that stark choice, and Bush is now turning to the pragmatists from that band of old-school insiders known as the Iraq Study Group for a way out of this mess. The Iraq Study Group is headed up by Republican former Secretary of State James Baker, and Democrat vice chair of the 9/11 Commission, Lee Hamilton. Other insiders in the group include Lawrence Eagleburger, Edwin Meese III, former Clinton White House Chief of Staff Leon E. Panetta, and even former Supreme Court Justice Sandra Day O'Connor. In fact, Bush appointed a member of the group, former Director of Central Intelligence Robert M. Gates, to replace Rumsfeld as Secretary of Defense.

But before we get too excited, we should recall that it was the Grand Wizard of all old-school insider pragmatists, Henry Kissinger, who helped shape the disaster of the Vietnam War with its failed plan of “Vietnamization,” and good ol Dr. Strangelove himself has been lurking around the White House of late, advising Bush that the only choice in Iraq is victory. The Iraq Study Group has made some tentative noise about a phased withdrawal of US combat forces from Iraq and involving Syria and Iran in some capacity. But, because they are, after all, intervention loving Washington insiders, we are unlikely to hear much about a common sense, and eminently practical way out of this mess.

To be clear, the U.S. should never have invaded Iraq in the first place. First, it was an undeclared, and therefore unconstitutional, war. Second, it was not in our national interest to do so as Saddam was hardly a credible threat to the U.S. Third, it was a strategic blunder of mammoth proportions, which has only given legitimacy to the radical elements within Islam. Fourth, it has taken the inevitable path of empire, with the inevitable corruption of the hearts and minds of the occupiers, who become more callous and brutal in the attempt to quell the growing resistance to the occupiers, which only further fuels that resistance. And lastly, the horrors of Abu Ghraib and other human rights violations have sullied this nation’s image in the eyes of the world –perhaps permanently.

But all of that being said, here is the “practical” and politically viable way out: Turn Iraq over to the members of the Arab League. Rather than trying to achieve “Iraqization” of Iraq, we should “Arabize” Iraq. The U.S. could announce to the 22 member states of the Arab League that within a set, short period of time, say six to eight months, the U.S. will begin withdrawing its troops. The U.S. could make it clear that at that point, the Arab League (of which Iran is not a member) will be expected to take over the peacekeeping until Iraq is strong enough to stand on its own, and will be expected to oversee whatever ultimate political solution is needed, including a potential partitioning of Iraq. If the Arab League chooses to Involve Iran, so be it. I would expect that many of the member states would be hesitant to give Iran too much of a direct role, but that would be their decision.

Our withdrawal could be complete within three to four months of that changing of the guard and a total of between nine months to a year from now not a single U.S. military boot would be in Iraq. That is the way out “with honor.” Last year, Republican Congressman Ron Paul of Texas proposed a similar solution when he noted:

Ironically, our involvement has produced an unusual agreement among the Kurds, Shiites, and Sunnis, the three factions at odds with each other. At the recent 22-member Arab League meeting in Cairo, the three groups agreed on one issue: they all want foreign troops to leave. At the end of the meeting an explicit communiqué was released: “We demand the withdrawal of foreign forces in accordance with a timetable, and the establishment of a national and immediate program for rebuilding the armed forces… that will allow them to guard Iraq’s borders and get control of the security situation.” Since the administration is so enamored with democracy, why not have a national referendum in Iraq to see if the people want us to leave?

After we left Lebanon in the 1980s, the Arab League was instrumental in brokering an end to that country’s 15-year civil war. Its chances of helping to stop the fighting in Iraq are far better than depending on the UN, NATO, or the United States. This is a regional dispute that we stirred up but cannot settle. The Arab League needs to assume a lot more responsibility for the mess that our invasion has caused. We need to get out of the way and let them solve their own problems.

In spite of the U.S. efforts to establish a strong Iraqi government and military, that ancient dispute between Sunnis, Shiites, and Kurds is devolving into a civil war. We would indeed be wise to leave ultimate resolution of that dispute to the Arab League. I argue that in addition to calling on the Arab League to broker a settlement, we should completely “Arabize” Iraq by announcing that those Arab states will be fully responsible for peacekeeping when we leave. In 1990-91, many of these same nations contributed well over 100,000 combat troops to the Gulf War and, as members of the “coalition of the willing,” supported the 2003 invasion to depose Saddam. They are capable of peacekeeping in the aftermath of the war many of them supported, but have let the U.S. bear that burden.

With last years Iraqi elections, and with Saddam’s recent conviction, the U.S. has achieved its two stated goals of removing Saddam and establishing a democracy (once again, presuming those were the real goals). The U.S. government can now claim it has attained victory in those achievements while leaving the inevitably uncertain future of Iraq exclusively in Iraqi and Arab hands. As for democracy, while none of the Arab League states are democracies, the democratic “cat” is already out of the bag in Iraq and would be difficult to put back in without further worsening the civil war or risking a radical Islamic takeover the Arab League likely fears even more. Even they can see that a democratic Iraq is a more stable Iraq.

But at this point, Bush should be willing to risk even ultimately losing democracy in Iraq to avoid the otherwise inevitable humiliating military defeat in the eyes of the world. If Iraq devolves into total civil war with Muslim peacekeepers responsible for security it would be tragic, but it could not be called a military defeat of the U.S. since the U.S. would no longer be the ultimate guarantor of Iraqi security.

The advantage for the U.S. would be avoiding such a perceived total defeat while the quantum difference for Muslims would be having Arab Muslim peacekeeping boots on the ground in Iraq, rather than American and British Christian boots. That is all the difference in the world when it comes to winning the hearts and minds of the estimated 1.2 billion Muslims on this planet, which should be the focus in this supposed war on islamist terrorism.

There, that is the “practical,” politically viable way out of this mess. Sadly, none of this is likely to happen. I predict that the Iraq Study Group, and the new Democratic leadership in Congress, is really not interested in fully disengaging from Iraq. Like the neocons, they will want the U.S. government to maintain control, in some manner, of Iraq’s future, and of course, over all of that oil. The old-school insiders on the Iraq Study Group, and the Democratic leadership (more old school insiders) just think they can do the Iraqi Imperialism game better.

Meet the new boss, same as the old boss.

Posted by Stewart Rhodes at 9:19 PM