From Andrew Sullivan at The Atlantic

A young reader argues that the media still doesn't get it:

I'm a passionate Ron Paul supporter, as are very many people approximately my age. I don't have a landline telephone, I’m not a registered Republican and I get practically all of my news from “alternative” resources (such as your blog). People like me are not on the pollsters’ radar. As some in the political analysis field have begun to suspect, traditional polling methods are blind to technology driven structural changes in political participation/awareness. Assuming the online support translates into real efforts to get out the vote, Dr. Paul is a stealthy but real contender.

Another thing worth noting is, I belong to a Ron Paul group on Face Book, the college-networking site. The membership rate of growth has been astounding; I joined a few weeks ago when we numbered a little over 2,000; now we're at 12,000 and climbing. I can tell you with confidence that Face Book has been the central hub of the Ron Paul online Blitz with outgrowths and initiatives such as students4paul.com and Republican Caucus Storm. Here’s a small example of how serious we are:

The largest Barack Obama group on Face Book has over 300,000 members. Ron Paul’s 12,000 sound like small potatoes in comparison…at first glance. Our group just finished meeting a $12,008 fundraising goal within 5 days of its inception (the deadline was 6/30). 5 days. Obama's group of 300K also has a fundraiser and has raised $17,000 — since the founding of the group! That's well over 90 days.

Internet lift for 'Dr No' in White House race 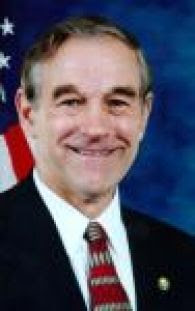 From Alex Spillius at the Telegraph

A little-known Texan congressman is exploiting the internet to launch a cut-price bid for the US presidency as fund-raising for big name candidates sets new records.

Ron Paul, 71, has combined his popularity online with core conservative values to transform his campaign.

Public interest in Dr Paul, who is known as Dr No in Congress because he has rejected so many bills as unconstitutional, has grown after each live debate with other Republican contenders.

Chat on the internet is attracting larger numbers to his campaign appearances and his fund-raising is rising healthily thanks to contributions solicited by email – a device used by all candidates but which, because of its low cost, favours the minor players.

Although he scores just a few per cent in opinion polls, his star is soaring on blogs and on networking and political websites.

Dr Paul’s channel on YouTube, the video-sharing website, has more subscriptions than any candidate from either major party, including Democrats such as Hillary Clinton and Barack Obama and Rudy Giuliani, the Republican.

Posted by Stewart Rhodes at 11:03 AM No comments: