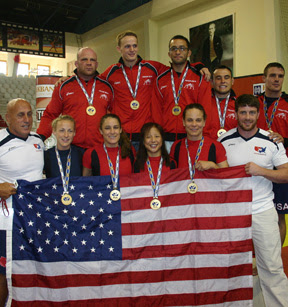 The winning U.S. team, with their proud winning coaches, Bob Anderson, on the left, and a smiling Jason Townsend, on the right, showing off some serious bling-bling!

I have not posted anything on this blog in over a week in part because I am just sick of all the negativity in the news and in the world in general, which has gotten me pretty damn depressed lately. But now here is a piece of damned good news! NINE gold medals for the U.S. and NINE world grappling champions! Totally friggin awesome!
Jason Townsend coached our kids in wrestling at the Extreme Couture gym here in Vegas (and also coaches as Cobra Kai Jiu Jitsu in Vegas), and is an excellent coach, so it is no surprise at all to us that the U.S. team so thuroughly kicked ass. Our kids were thrilled to see this picture of Jason and his team, with all those medals.

When we first met Jason, we had no idea he was playing such an instrumental part in advancing the sport of grappling (also known as submission wrestling, what with its combination of wrestling and Brazilian jiu jitsu submission holds). 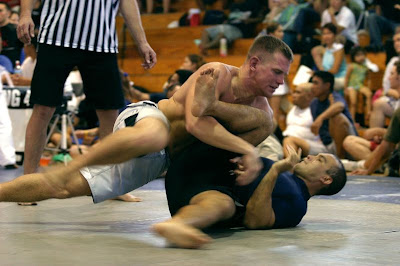 But we soon learned that Jason is working hard, traveling all over the world, to attain the dream of grappling becoming an Olympic sport. We know he will attain that goal, which will be an amazing acheivement.

This win at the Grappling World Championships is a prelude of things to come.

We look forward to the day when we will see U.S. Olympic gold medals for grappling hanging around the necks of a U.S. Olympic team, with Jason standing there with an even bigger grin on his face. It will happen - you watch! - Stewart Rhodes

All nine World champions captured gold medals at the USA Wrestling Grappling World Team Trials in Las Vegas, Nev. in June. The USA won 21 medals out of a possible 35 medals in the event. Included was a sweep of all four medals at the men’s 92 kg/202.5 lbs. division.

In convincing terms, the USA has set the bar for the rest of the world in international Grappling competition.

“I really think have a training camp and bringing many of our people together helped. People perish without a vision. Our coaches developed a vision with this team. We didn’t want to just win the championship. We wanted everybody to be the most outstanding we could be, no matter the outcome,” said U.S. World Team Coach Bob Anderson.

It was a great day for the U.S. team, which entered 27 athletes in the field. In the men’s division, four of the five gold-medal finals featured all-USA matchups.

“The team performed at the highest level against great competition,” said U.S. World Team Coach Jason Townsend. “All the athletes had tough matches and pulled through with flying colors. This is the beginning of a new era for Grappling. It was a pioneering effort for USA Wrestling. We were excited to be a part of this historic event, and we will work hard to remain a dominant force for years to come.”