Just took a look at my poor, neglected blog and realized I had not posted since the damn Romney whisper incident, and now it is months later and Romney is out, the Ghouliani is out, etc. and the only two men still standing in the fight for the Republican nomination are McCain and Ron Paul.

Ah, John McCain, John McCain. Many self-described conservatives are putting up at least a show of displeasure and resistance at McCain (kinda like how a prostitute might feign shock, dismay, and mild resistance for a customer before giving him what is already bought and paid for). But they will take whatever the party mucky-mucks dictate, and will rally round the fake conservative so-called lesser of two evils again, out of their terror of a Dem in office. Same ol same ol.

How anyone who calls themselves an advocate of smaller government, limited government, and the Constitution could ever have supported that cracked old fart is beyond me. McCain hasn't got the first clue about limited government. Way back in the early 90s he wanted a federal law to friggin ban the UFC and all mixed martial arts (an entire friggin sport!) just because he did not like it or understand it. 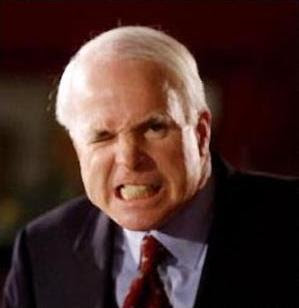 "the UFC is Human Cockfighting" - damn, what an idiot.
So, McCain was on my shit list from day one for attempting to ban my favorite sport, and that was only the beginning of his stupid ideas on what he thinks is good for the rest of us, which he thinks he has the power to impose by force of law. McCain Feingold? Assault weapons ban? Trigger locks on your gun? Closing the so-called "gun show loophole"? Patriot Act? the list of stupidity and sell-outs of the Constitution is endless.

Ah well. People get the government they deserve - or to be more accurate, those who support McCain, Clinton, or Obama will get exactly what they deserve, but unfortunately those dumb asses will drag the rest of us over the cliff too.

I am hearing that many delegates from other states are going to Ron Paul, so who can say what will be the final result of the Nevada State Convention. What happens if conservatives across America "just say no" to McCain and actually do the right thing, for once, and go with Ron Paul? Man, that would be craaaazy! Totally off the hook! Not likely to happen in enough numbers to dump the geezer from Arizona, but who knows? I have been wrong before when it comes to the crazy world of politics. I hope I am wrong again.

Anyway, I will try to post more regularly again. Sometimes I just need a break from blogging, but then I feel a need to vent and am back at it.

Great! Thanks for sharing the information. That is very helpful for increasing my knowledge in this field. Visit our site Twitter to know more about Twitter.

I haven’t any word to appreciate this post.....Rent a car IslamabadReally i am impressed from this post....the person who create this post it was a great human..thanks for shared this with us

Positive site, where did u think of the data on this posting?Rent a car for Wedding in Islamabad I'm satisfied I found it however, sick be inquiring soon to discover what extra posts you incorporate.

I have read so many articles regarding the blogger lovers
however this article is, in fact, a pleasant piece of writing, keep it up from Rent a car Pakistan